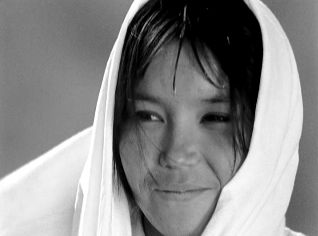 The story of Djamilya is, at least on the surface, simple and familiar. In wartime Russia, a peasant family in a remote Kirghiz farm, harvests wheat to be used for soldiers' bread. The farms are staffed mostly by women, children and men too old to be drafted. The younger men that help farm have been injured seriously enough to be dismissed from service. Seit, the oldest remaining boy in his family helps with the farming and is also charged with protecting his sister-in-law, Djamilya. That Djamilya's husband is a soldier currently recuperating at a hospital does nothing to keep the men showering Djamilya with unwanted attention. An injured soldier, Daniyar, is assigned to help with the farming. He befriends Djamilya and Seit, but often finds himself the subject of teasing. Daniyar also lets Djamilya know his feelings for her. After resisting his advanced, Djamilya gives in, in part because of the neglect she feels has been expressed by her husband, who mentions her last in his uninformative letters to the family. Djamilya runs off with Daniyar. Looking back at his life, Seit recognizes that he was also in love with Djamilya, but at the time did not understand his sense of jealousy. He soon leaves the family himself when the opportunity is offered to study art away from home.

Djamilya is based on the autobiographical story by Chingiz Aitmatov. While inspired by his own experiences growing up in Kirghiz, Aitmatov's character grows up to be a painter, rather than a writer. Aitmatov wrote the screenplay and provides narration. The film is about about a way of life that probably changed drastically after World War II. Without there being any sense of conflict or contradiction is a life that has one foot steeped in cultural traditions of several hundred years, and another foot following the path and goals of Joseph Stalin. Even though the fighting is unseen, the effects of war are manifest by the actions of Djamilya and Seit, going against traditions of wives as the bedrock of the extended families, and sons growing up to replace their fathers in the fields. 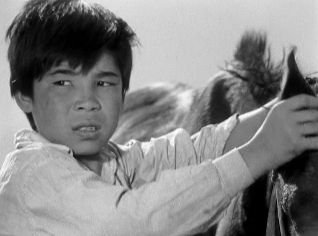 i could find nothing about director Irina Poplavskaya, and I don't know how much of the film reflects what was specifically written in Aitmatov's screenplay, but there are many moments when Djamilya seems closer in cinematic expression to the French New Wave films and American Independent films that emerged in the early part of the Sixties. There are montages of herds of galloping horses and rustling wheat fields. When Daniyar chases Djamilya through one of the fields, it could well be a scene from a Soviet Truffaut. There is a moment for low tech special effects when Seit is out by a lake at night, the scene illuminated with sparkles that exist for no other reason than providing an otherworldly quality for its own sake.

The actor who plays Daniyar, Suimenkul Chokmorov, also provided the paintings that are presented as the work of Seit. The film opens with a man looking a group of the watercolor paintings, holding a stack while standing, letting them drop to the floor one by one. The watercolors act to inform the viewer that the story takes place in a past time, from the point of view of a child. A later montage of paintings, with shots of details, or using different angles, depicts Daniyar and Djamilya's escape from the village and Seit's imagined fate of the two lovers. The paintings are filmed in color, contrasting with the monochrome of most of the story. When color is used for a live action shot of some horses, the color is altered to appear as if in one of Seit's paintings with their red horses against a blue background.

Djamilya seems markedly atypical for a Russian film even forty years after its initial release. Even though there is a brief interview with director Irina Poplavskaya, she mostly discusses how she had to fight to do the creative color photography and credits Aitmatov for supporting her vision for the film. There is no mention of any role played by the more established director Sergei Yutkevich in the making of the film, or of her own career which appears to have had a lengthy lull following the completion of Djamilya. Aitmatov's story has inspired at least two other versions that emphasized the relationship between Djamilya and Daniyar. Undoubtedly reflecting the hand of its original author, the film Djamilya is about what is in spirit a romantic triangle, with the feelings of a young boy manifesting in the form of art that creatively documents a past life and its people. 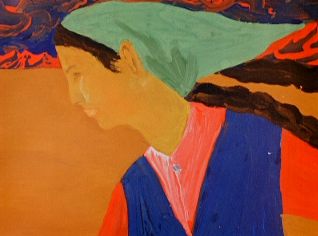